Mike is committed to building a cohesive America, where no American has to feel apprehension, discomfort or fear fellow Americans

I want the Mosque built on Ground Zero.

I am opposed to the building of the "mosque" two blocks from Ground Zero.
I want it built on Ground Zero.

There's been so much that's been said about this manufactured controversy, I really don't want to waste any time on this day of remembrance talking about it. But I hate bigotry and I hate liars, and so in case you missed any of the truth that's been lost in this, let me point out a few facts:

1. I love the Burlington Coat Factory. I've gotten some great winter coats there at a very reasonable price. Muslims have been holding their daily prayers there since 2009. No one ever complained about that. This is not going to be a "mosque," it's going to be a community center. It will have the same prayer room in it that's already there. But to even have to assure people that "it's not going to be mosque" is so offensive, I now wish they would just build a 111-story mosque there. That would be better than the lame and disgusting way the developer has left Ground Zero an empty hole until recently. The remains of over 1,100 people still haven't been found. That site is a sacred graveyard, and to be building another monument to commerce on it is a sacrilege. Why wasn't the entire site turned into a memorial peace park? People died there, and many of their remains are still strewn about, all these years later.

2. Guess who has helped the Muslims organize their plans for this community center? The JEWISH COMMUNITY CENTER of Manhattan! Their rabbi has been advising them since the beginning. It's been a picture-perfect example of the kind of world we all want to live in. Peter Stuyvessant, New York's "founder," tried to expel the first Jews who arrived in Manhattan. Then the Dutch said, no, that's a bit much. So then Stuyvessant said ok, you can stay, but you cannot build a synagogue anywhere in Manhattan. Do your stupid Friday night thing at home. The first Jewish temple was not allowed to be built until 1730. Then there was a revolution, and the founding fathers said this country has to be secular -- no religious nuts or state religions. George Washington (inaugurated around the corner from Ground Zero) wanted to make a statement about this his very first year in office, and wrote this to American Jews:

"The citizens of the United States of America have a right to applaud themselves for having given to mankind examples of an enlarged and liberal policy -- a policy worthy of imitation. ...

"It is now no more that toleration is spoken of as if it were the indulgence of one class of people that another enjoyed the exercise of their inherent natural rights, for, happily, the Government of the United States, which gives to bigotry no sanction, to persecution no assistance, requires only that they who live under its protection should demean themselves as good citizens ...

"May the children of the stock of Abraham who dwell in this land continue to merit and enjoy the good will of the other inhabitants -- while everyone shall sit in safety under his own vine and fig tree and there shall be none to make him afraid."

3. The Imam in charge of this project is the nicest guy you'd ever want to meet. Read about his past here.

4. Around five dozen Muslims died at the World Trade Center on 9/11. Hundreds of members of their families still grieve and suffer. The 19 killers did not care what religion anyone belonged to when they took those lives.

5. I've never read a sadder headline in the New York Times than the one on the front page this past Monday: "American Muslims Ask, Will We Ever Belong?" That should make all of us so ashamed that even a single one of our fellow citizens should ever have to worry about if they "belong" here.

6. There is a McDonald's two blocks from Ground Zero. Trust me, McDonald's has killed far more people than the terrorists.

7. During an economic depression or a time of war, fascists are extremely skilled at whipping up fear and hate and getting the working class to blame "the other" for their troubles. Lincoln's enemies told poor Southern whites that he was "a Catholic." FDR's opponents said he was Jewish and called him "Jewsevelt." One in five Americans now believe Obama is a Muslim and 41% of Republicans don't believe he was born here.

8. Blaming a whole group for the actions of just one of that group is anti-American. Timothy McVeigh was Catholic. Should Oklahoma City prohibit the building of a Catholic Church near the site of the former federal building that McVeigh blew up?


9. Let's face it, all religions have their whackos. Catholics have O'Reilly, Gingrich, Hannity and Clarence Thomas (in fact all five conservatives who dominate the Supreme Court are Catholic). Protestants have Pat Robertson and too many to list here. The Mormons have Glenn Beck. Jews have Crazy Eddie. But we don't judge whole religions on just the actions of their whackos. Unless they're Methodists.

10. If I should ever, God forbid, perish in a terrorist incident, and you or some nutty group uses my death as your justification to attack or discriminate against anyone in my name, I will come back and haunt you worse than Linda Blair marrying Freddy Krueger and moving into your bedroom to spawn Chucky. John Lennon was right when he asked us to imagine a world with "nothing to kill or die for and no religion, too." I heard Deepak Chopra this week say that "God gave humans the truth, and the devil came and he said, 'Let's give it a name and call it religion.' " But John Adams said it best when he wrote a sort of letter to the future (which he called "Posterity"): "Posterity! You will never know how much it cost the present Generation to preserve your Freedom! I hope you will make a good use of it. If you do not, I shall repent in Heaven that I ever took half the Pains to preserve it." I'm guessing ol' John Adams is up there repenting nonstop right now.

Friends, we all have a responsibility NOW to make sure that Muslim community center gets built. Once again, 70% of the country (the same number that initially supported the Iraq War) is on the wrong side and want the "mosque" moved. Enormous pressure has been put on the Imam to stop his project. We have to turn this thing around. Are we going to let the bullies and thugs win another one? Aren't you fed up by now? When would be a good time to take our country back from the haters?

I say right now. Let's each of us make a statement by donating to the building of this community center! It's a nonprofit, tax-exempt organization and you can donate a dollar or ten dollars (or more) right now through a secure pay pal account by clicking here. I will personally match the first $10,000 raised (forward your PayPal receipt to webguy@michaelmoore.com). If each one of you reading this blog/email donated just a couple of dollars, that would give the center over $6 million, more than what Donald Trump has offered to buy the Imam out. C'mon everyone, let's pitch in and help those who are being debased for simply wanting to do something good. We could all make a huge statement of love on this solemn day.

PURPOSE
This issue is engaging the American Public, both for and against, in this blog I will save the links of articles that come across my knowledge as a reference for the researchers. We have to find solutions for co-existence and sustainable harmony.

DAY LIGHT: It is clear as daylight, that it is a political opportunity for the losing right wing republicans. I pray they do not twist patriotism to gain leverage, that would be a shameful act.

Location of the Mosque 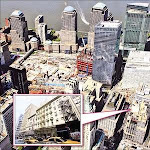 It is not a mosque and it is not on Ground Zero. It is a Community Center, an interfaith chapel, a memorial for 9/11, a pool for the community, an auditorium to hold conferences, a place to teach pluralism and co-existence and also place for Muslim prayers - above all it is open to the public.

It is a shrine and it is a catalyst to consciously create a society we desire; where all of us will learn to respect the otherness of other and accept the God given differences. It is anti-thetical to radicals from all traditions.

The ones who are opposed to the Center will change their hearts and minds if they know the facts;

OPPORTUNISTS
If you surfed the net, you might reasonably conclude that the ones opposing are the right wing Republicans like Palin, Gingrich, Paladino, Corker, Tancredo, Rowe, McCain and others.

They continue to fall in the abyss of ignorance and are out of touch with the American public. The pied piper Limbaugh had led them once and his cooked up support will blind them again.

These are the shameless opportunitst, the kind who lied about WMD and massacred people in Iraq and Afghanistan in our name while the Criminal Bin Laden is still at large. They are lying again, one after the other. Gingrich is running his mouth without the media questioning him.

They got the Americans riled up and I sincerely hope, we the Americans do not fall for their fabrications and bring disharmony in our society.

We have to consciously create institutions and systems that would become a catalyst to a positive change and bring about cohesive functioning of the society. It is our duty to keep law and order and faithfully guard the safety of every citizen.

As Americans we cannot do to fellow Americans what we did with the Native Americans; annihilate them in millions.